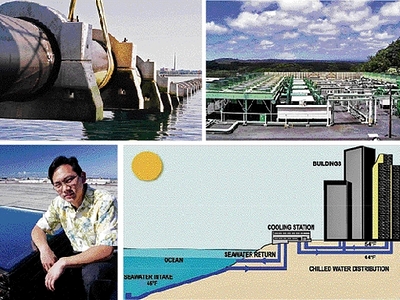 HONOLULU — A state better known for sun and fun is quietly
morphing into one of the world’s leading incubators of alternative
energy.

Royal Dutch Shell PLC is heading up a test venture in Hawaii to
turn oil-rich algae into fuel. If the process is found commercially
viable, the Anglo-Dutch conglomerate could build algae-
processing plants elsewhere.
THE JOURNAL REPORT

Ever-Green Energy LLC of St. Paul, Minn., plans to build a plant
in Honolulu that uses seawater to cool office buildings; if
successful, the project will be expanded to other states. A start-up
company, meanwhile, is deploying miniature solar-thermal
collectors on Oahu to help generate more power for the local
electricity grid. This set-up, too, if successful, will be reproduced
elsewhere.

“Hawaii is the only place in the world where you have access to
every form of renewable energy, and you are on the dollar and
the U.S. legal system,” says Joelle Simonpietri, a former venture
capitalist who now heads an algae-to-fuel firm called Kuehnle
AgroSystems Inc.

Hawaii is trying to convert to clean energy as fast as it can.
Petroleum imports make up about 80% of the energy supply for
Hawaii’s main utility, leaving the state among those hardest hit by
the run-up in oil prices. Electricity rates have gone through the
roof. The average residential rate on Oahu, where most of
Hawaii’s 1.2 million residents live, had doubled to 25.50 cents a
kilowatt hour — the highest in the U.S. — from 12.74 cents in 1999,
according to Hawaiian Electric Co., the state’s major utility.

So, in January, Gov. Linda Lingle announced plans under a state-
federal partnership for Hawaii to derive 70% of its energy from
renewable sources by 2030 — one of the most ambitious targets
in the world.

The state has gotten a head start toward this goal in some places.
On Maui, for example, wind farms power 11,000 homes, or about
10% of that island’s energy, while on the Big Island, which is
Hawaii itself, geothermal power from volcanic vents accounts for
about a fifth of the energy there.

And on Oahu, Hawaiian Electric is building a new power plant that
will generate 110 megawatts — enough power for about 30,000
homes — and will run completely on biodiesel fuel. The $160
million plant, expected to open next year, will initially get its fuel
from imported palm oil.

“Everything is possible as oil prices rise,” says Henry
Montgomery, chief executive of MontPac Outsourcing, a finance
and accounting consultancy in Honolulu.

Not all the technologies are problem free. Environmentalists want
to make sure, for example, that Hawaiian Electric doesn’t import
any of its palm oil from endangered rainforests in Asia. Utility
officials say that their palm oil will come from sustainable sources,
and that over time the plant will rely more on crops grown in
Hawaii.

There’s also a question of whether the sources of energy can
overcome technical hurdles, among other challenges.

Gov. Lingle, for her part, says Hawaii is counting on a multitude of
the clean-energy technologies to succeed — not any particular
one. “If our experience with petroleum has taught us anything, it is
not to get reliant on any one source of energy,” the governor said
in a recent interview at her state capital office, where, moments
earlier, the power went down due to a temporary malfunction.

Here is a sampling of what’s going on in Hawaii:

One of Hawaii’s most abundant resources is its sunshine. But like
many places, solar power used to cost so much more than
conventional power it largely wasn’t economical — until oil prices
got so high.

Now, several solar companies in Hawaii are trying to cash in on
the boom in clean-energy demand. Hoku Scientific Inc. until last
year specialized in making fuel cells. Now the Honolulu company
makes silicon for photovoltaic solar cells at a factory in Idaho,
while in Hawaii it installs solar panels for mostly corporate
customers including the Bank of Hawaii and Hawaiian Electric.
“Obviously, with the high electric rates, Hawaii is a great place to
sell alternative energy,” says Darryl Nakamoto, Hoku’s chief
financial officer.

Another company, Sopogy Inc., is augmenting local power with
solar-thermal energy, a technology that uses mirrors and lenses
to concentrate the sun’s rays on fluids, creating steam that turns
turbines to generate electricity. Spun off last year from a
technology company called Energy Industries, Sopogy has
created a miniature version of the giant solar collectors found in
places like the California desert. “Micro” collectors weigh about
100 pounds, measure 12 feet by five feet, and can be deployed
on building rooftops, Sopogy officials say. Also, unlike many
technologies that tap the sun, Sopogy has designed its system so
it can store solar energy, the company says.

Last year, Sopogy got $10 million in state revenue bonds to set
up a one-megawatt demonstration farm on Hawaii. In May, the
state Legislature approved $35 million in bonds to help Sopogy
build a solar plant on Oahu that will generate 10 megawatts, or
enough power for about 3,000 homes, for Hawaiian Electric.
Privately held Sopogy has raised more than $10 million in other
money as well, including from Kolohala Ventures, a Honolulu
venture-capital firm.

If successful, Sopogy hopes to expand its micro solar plants
around the world. “We want to see our revenues at $1 billion in
five years,” says Darren Kimura, president and chief executive of
Sopogy, and founder of Energy Industries.

One of the holy grails in alternative energy is a system that can
extrude oil from algae on a grand, and economical, scale.
Scientists say oil represents as much as half the body weight of
algae, compared with about 20% for corn, one of the most widely
used biofuel crops. Algae also grows as much as 10 times faster
than corn, and can be processed for oil without disrupting food
supplies.

However, the technical challenges have proven large in the past.
For example, studies have shown algae strains that can produce
the most energy often need to be starved of nutrients, which
stunts their growth. Indeed, some previous efforts in the U.S. and
Japan over the past 30 years have been dropped, in part,
because costs were exorbitant.

But now that oil is so high, several companies are turning to algae
again. One of the more closely watched is Cellana, a Shell-led
venture with a University of Hawaii spin-off, HR Biopetroleum.
The companies announced in November 2007 that the venture
would build a pilot facility on the Big Island’s Kona coast. Since
then, researchers have been busy planting various strains of
algae in test tubes that sit in the warm sea water on the Kona
coast. One of the tasks facing them is to find algae that both
contains the highest amounts of oil and can grow in warm water.
“We’re in the process of whittling down the top super bugs from
hundreds to 10,” says Susan Brown, a University of Hawaii
researcher who collects specimens for the project on scuba dives
around local waters.

One of the simplest clean-energy concepts is to take cool water
from the ocean or a lake and use it to help air-condition buildings
in nearby cities. The technique has been used in places like
Amsterdam and Toronto, with significant power savings.

But piping water to where it needs to go requires more capital
investment than many places were willing to make when oil was
cheaper. Until recent years, there were also limitations on how
deep pipes could be put to suck up the colder water.

In 2003, David Rezachek — a former manager of Hawaii’s
alternative energy program — held a workshop in Honolulu to
revive local interest in seawater air-conditioning. Even then,
Hawaii’s electric rates were the highest in the country. “I said, ‘It’s
time to quit talking about it, let’s do this thing,’” Mr. Rezachek
recalls.

He helped get Ever-Green Energy — then called Market Street
Energy — to set up a subsidiary called Honolulu Seawater Air
Conditioning. The company invested about $3.5 million in the
venture, while $10.8 million has been raised from mainland and
Hawaiian investors, including Kolohala Ventures, says Mr.
Rezachek, associate development director for Honolulu
Seawater. The state Legislature has also authorized $100 million
in tax-exempt revenue bonds for a seawater cooling project.

The venture proposed in late 2003 a seawater cooling project be
built for downtown Honolulu. Although ocean temperatures on the
beaches around Oahu hover in the mid 70s, they drop to 45
degrees at 1,600 feet deep a few miles offshore. So Honolulu
Seawater proposed to run a pipe from 1,600 feet deep to a
cooling plant onshore, four miles away. The cold seawater would
pass through a heat exchanger where it would cool fresh water
from separate pipes used to chill nearby office towers downtown.

Designed to cool 12.5 million square feet of office space — or the
equivalent of almost five Empire State Buildings — the Honolulu
system is projected to save as much as 15 megawatts of
conventional power, while at the same time cutting greenhouse
gas emissions by 84,000 tons a year. The venture expects to
secure permitting by early next year, and be in operation in 2010
at a cost of about $165 million.

Few places in the world have as much geothermal energy
potential as Hawaii’s Big Island, where the Kilauea volcano has
been erupting since 1983. As long ago as 1881, Hawaiian King
David Kalakaua met with inventor Thomas Edison to discuss
harnessing the power of Hawaii’s volcanoes.

In the 1970s, a public-private partnership dug the first geothermal
well in Puna on the windy east side of the island. Over time,
enough hot water and steam was taken out of the ground to fuel a
30-megawatt power plant. The plant, owned by Reno, Nev.-based
Ormat Technologies Inc., provides power to about 10,000 homes,
or 18% of the Big Island’s total supply, according to Hawaiian
Electric.

Conceivably, the Kilauea volcano could provide enough power to
meet all of Hawaii’s needs, state utility officials say. But there are
several limitations. One is the Big Island’s isolation from the other
Hawaiian islands. For example, the ocean is so deep between it
and the next closest island, Maui, that officials in the state
abandoned a past plan to try and lay an underwater cable
between the islands to transfer the geothermal energy.

Another issue: opposition to significant expansion of geothermal
by some native Hawaiians, on grounds the volcano is sacred,
says Robert Alm, a spokesman for Hawaiian Electric.

–Mr. Carlton is a staff reporter in the San Francisco bureau of
The Wall Street Journal.