The resource-rich state depends almost entirely on imported oil to fuel its vehicles and stoke its power plants. It aims to obtain 70% of its total energy needs from clean sources within 20 years. 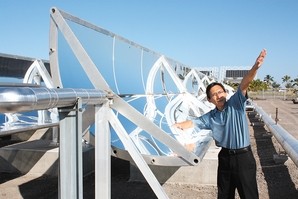 Take a ride in Ron Baird’s pickup truck along the volcanic shore of Hawaii’s Big Island and he’ll show you an inventor’s wonderland.

On one parcel of this government-created energy laboratory, rows of mirrors shine white-hot in the sun, turning heat into energy. On another, brown water tanks harbor strands of algae that will be made into fuel. Nearby is a wind turbine whose blades spin parallel to the ground.

“It’s an awesome amount of things going on here,” said Baird, chief executive of Natural Energy Research Laboratory of Hawaii Authority, which is helping to nurture 42 green private-sector businesses on 877 acres of land in Kona.

Tiny Hawaii is gunning for the title of the nation’s green energy capital. It’s aiming to obtain 70% of its total energy needs from clean sources within 20 years.

That ambitious target blows the solar panels off California’s mandate to get a third of its electricity from renewables by 2020. But Hawaiian officials have concluded their state has little choice.

This tropical paradise is an energy beggar that depends almost solely on oil to fuel its vehicles and stoke its power plants. That’s left the state, which doesn’t produce a drop of crude, vulnerable to spills, price swings and geopolitics. Hawaii residents already pay the highest pump prices and electricity rates in the country. The state imports around 51 million barrels of oil, costing billions annually, according to government figures.

“We really are the canary in the coal mine,” said Jeff Kissel, chief executive of the Gas Co. of Hawaii. “What’s happening to us with oil is going to happen to the rest of the country as . . . supplies diminish.”

More worrisome still is global warming. The threat of rising seas and pounding storms linked to climate change has put Hawaii on a collision course with Mother Nature.

Although Hawaii’s efforts to green itself won’t make much of a dent in the world’s total carbon emissions, environmentalists hope the state can prove what’s possible. The goal is to transform the nation’s most energy-dependent state into its cleanest and most sustainable.

“We’re adopting policies and technologies here that can serve as a model for the rest of the globe,” said Jeff Mikulina, executive director of the Blue Planet Foundation, a Hawaii clean energy advocacy group.

The state this year began requiring that all new homes be built with solar water heaters. Hawaii is working with electric transport firm Better Place of Palo Alto to build a network of recharging stations to jump-start mass use of electric vehicles on the islands. Meanwhile, the state’s public utilities commission is devising a compensation system to encourage homeowners and businesses to go solar by paying them to generate green electricity.

The policies stem from an agreement Hawaii signed with the Department of Energy in 2008. The state pledged to obtain 70% of its total energy needs by 2030 — 40% from renewable electricity generation and the remaining 30% from energy efficiency. Known as the Hawaii Clean Energy Initiative, that agreement has since been strengthened with binding legislation that exceeds California’s mandate to get 33% of its electricity from renewables by 2020 (though Hawaii has an extra decade to get there).

About 6.5% of Hawaii’s electricity came from renewable sources other than hydroelectric power in 2007, according to the National Renewable Energy Laboratory. That’s about half what California — the nation’s solar champion and a major player in wind and geothermal energy — has achieved.

But experts said Hawaii’s small size and unique geography could prove advantageous in the race for energy independence. With just 1.3 million inhabitants, its energy consumption is small. The islands have abundant solar, wind, geothermal and wave resources. And Hawaiians are less likely to object to the cost of renewables since they already pay high energy prices.

“It’s easier for Hawaii to pull this off than anyone else,” said Alison Silverstein, an independent consultant and onetime energy regulator. “They know how bad things can get, and they are highly motivated . . . to take action.”

Some of Hawaii’s projects might sound like the stuff of science fiction. The state is looking into building a 30-mile undersea cable to link proposed wind farms on Lanai and Molokai into the electric grids on Oahu and Maui. A local company is working to provide air conditioning in 40 downtown Honolulu buildings using chilly sea water pumped from three miles out in the ocean. And Hawaii’s own Gas Co. is using municipal solid waste and animal fat to make synthetic natural gas to supply energy to its customers.

“If Saudi Arabia is rich in oil, you could use the analogy that Hawaii is rich in renewable resources,” said Will Rolston, energy coordinator for the County of Hawaii, which comprises the state’s Big Island.

The Big Island’s grid already obtains about one-third of its power from renewables, Rolston said, including solar, wind and geothermal. It’s also at the forefront of some of Hawaii’s biggest experiments, thanks in part to the Natural Energy Research Laboratory of Hawaii Authority.

In addition to its role as a green business incubator, the lab is a leading center for research on generating electricity by exploiting temperature differences between deep and shallow layers of seawater, a process known as ocean thermal energy conversion.

The research laboratory is also a showplace for innovations including seawater air conditioning. That technology uses cold, deep ocean water to cool the freshwater that circulates in a building’s air-conditioning system, eliminating the need for power-sucking chillers.

Baird likes to say that his office, which, like other buildings at the research laboratory, uses the ocean air-conditioning system, “is so cold I could lease it to Costco to store lettuce.”

Hawaii’s other islands are getting on board. Military family housing being built on Oahu will have meters in every home so that residents can tell how much energy they’re using and compare it with their neighbor’s usage. Such peer pressure has been proven to encourage conservation.

The military is also experimenting with electricity-generating turbines off the coast of Oahu that harness energy from ocean waves. 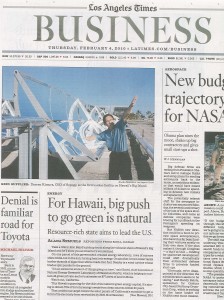 Some Hawaii residents are dubious about their state’s big ambitions. The undersea cable proposal and a plan to build a commuter rail line have stirred concerns about cost. A survey by the Blue Planet Foundation found that residents rated energy independence behind other important issues including jobs, healthcare and traffic congestion.

Some proactive homeowners, such as Karen Young and Fred Dodge, said they’ve been scorned for making the switch to clean energy. The couple spent $23,000 to put solar panels on their house in an Oahu neighborhood. Some neighbors sniffed that only rich people could afford such a luxury.

The family’s utility bill dropped from $110 a month to about $23, Young said. Then a tropical storm blew through and knocked out the power in the neighborhood for a day. Other homes in the neighborhood went dark, but the Young-Dodge household was still running.

Having a working refrigerator and lights was proof enough that they’d done the right thing, Young said, even if none of their neighbors followed suit.

“In the night, the electricity had gone off and everyone was having problems,” Young said. “But we were still lit.”