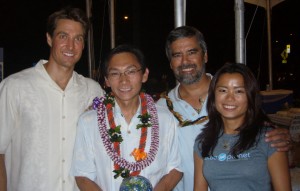 At the Waikiki Green Aloha Concert before an estimated crowd of 500, Sopogy founder, President, Chief Executive Officer and Energy Industries Founder and Chairman of the Board Darren T. Kimura has just been awarded the Honua Award by the Blue Planet Foundation.

Over his 17 year career Darren’s companies have helped move Hawaii towards a clean energy future. Energy Industries has introduced and installed numerous clean energy technologies saving kilowatt hours and reducing PCBs and Mercury through recycling programs. Sopogy is developing the next generation of high efficiency solar panels and energy storage technologies for Hawaii and the World. Keahole Solar Power developed and constructed a 2 megawatt solar thermal project and is developing an additional 30 megawatts of fossil fuel free power. Together his companies employ and support hundreds of green collar jobs and kept over $500 million in Hawaiis local economy through energy savings. In addition his work has off-set over 2 million metric tons of CO2 emissions which is the equivalent of reducing 27,000 tankers of gasoline or eliminating the consumption of 4.6 million barrels of oil.

“This Award is symbolic of the opportunities that exist here in Hawaii” said Darren T. Kimura. “We’ve accomplished a lot over the past 17 years but we/ve still got so much more to do and we struggle to save our planet and our species.”

The Honua (“Earth”) Award is given annually to recognize individuals or organizations who have made significant contributions to moving Hawaii along the path towards a clean sustainable energy future. Their achievements affecting our energy future could be economic, social/cultural, environmental, or some combination. The first Honua Award was presented in 2008 to Maurice Kaya, the former Hawaii state energy office administrator.

The selection committee for the Honua Award is the Blue Planet Foundation Board of Directors:
· Henk Rogers, software entrepreneur and founder of the Blue Planet Foundation;
· Akemi Rogers, owner of Fishcake and co-founder of Blue Lava Technologies;
· Ben Cayetano, former Governor of the State of Hawai„i;
· Prof. Peter Crouch, Dean of the College of Engineering at UH Manoa;
· Stanley Hong, Esq., an attorney and leader in business, civic and community affairs;
· Elizabeth Kapu’uwailani Lindsey, Ph.D., an award-winning filmmaker and anthropologist;
· Bob Lloyd, Chairman of the V Foundation for Cancer Research;
· David Williams, retired Senior Vice President of the Whirlpool Corporation; and
· Prof. Maxine Burkett, Director of the Center for Island Climate Adaptation and Policy.