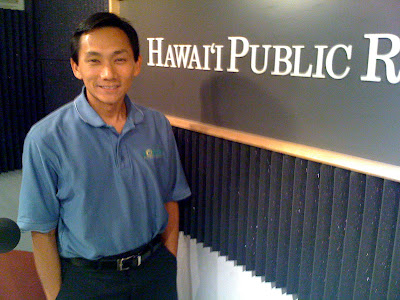 Hawaii Public Radio’s Energy Futures program airs weekly on Mondays at 5 pm HST. Topics include renewable energy development, reducing Hawaii’s dependence on imported fuels and others that will help residents understand the options before them as they and their fellow citizens chart a new energy future for Hawaii.

Concentrated Solar Power Has Day in the Sun

Darren Kimura, president & CEO of Sopogy
We’re stretching and we know it, but the headline seems to fit the tone of this week’s Energy Futures program on Hawaii Public Radio. Our guest was Darren Kimura, long-time solar energy expert and currently the president and CEO of Sopogy, the local concentrated solar company.

Kimura gave a good overview of CSP’s potential and discussed some current projects his company has underway, including the array at the Natural Energy Laboratory of Hawaii on the Big Island and a two-year test of its solar air conditioning concept in Southern California. The show is archived at HPR’s website.

CSP is one of the renewable technologies to be covered by the Hawaii Public Utilities Commission’s feed-in tariff decision and order, which came to light last week. Energy Futures’ guest next week will be PUC Chairman Carlito Caliboso. As we noted on our Hawaii Energy Options blog, we think his guest appearance will produce calls from developers who may have more than a few questions about the Commission’s D&O. (The Honolulu Advertiser editorialized favorably about the D&O today.)