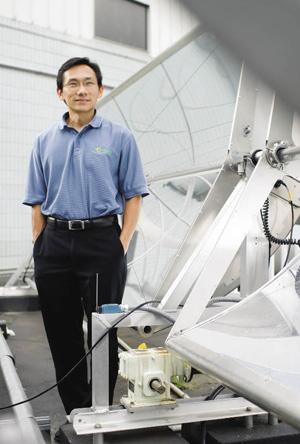 Being Part of the Solution to Big Global Problems

Growing up in Hilo, Darren Kimura saw dock strikes and the closings of sugar plantations and wondered why Hawaii’s people could not be part of their own economic solutions. When the University of Hawaii graduate decided to start a solar-energy business, he chose the much-riskier route of creating new technologies rather than distributing and selling existing products and services.

“Hawaii not only imports oil and exports our dollars for our energy, but we also import technology for renewable energy and export dollars for that, too,” he says. “Renewable energy is the new agriculture and technologies can be designed, developed and deployed here, bringing clean green power to the Islands, but also sold around the world from Hawaii.”

As proof, Sopogy’s invention and manufacture of a unique solar concentrating panel has evolved a new technology called “MicroCSP” (Micro-Concentrating Solar Power), a miniaturized version of larger, decades-old CSP technologies operating in the world’s hot deserts. Reducing the size and improving the durability for a proven solar-energy technology means places like Hawaii – with an ocean salt and volcanic atmosphere, limited land space and tropical-storm weather – can harness sunlight on a large scale for energy.

In December, Sopogy unveiled the world’s first and largest MicroCSP facility, a 4-acre, 500-kilowatt-capacity solar farm in Kona on the Big Island, which can power more than 250 homes and cut oil imports by 2,000 barrels annually. The company says its scalable and modular MicroCSP solar-power collectors, together with its proprietary technologies, have caught international attention and a project is now proposed for Spain. From 2007 to 2008, revenues for the Honolulu-based company of 30 employees soared 680 percent.

However, Kimura says, it wasn’t an overnight success for Sopogy, which is an abbreviation of the words solar-power technology. He started the company in 2002 with his own money and spent the first five years without a profit, while focusing on the development of CSP intellectual properties.

New uses being explored for Sopogy’s technology include creating clean drinking water from sea water and manufacturing portable refrigeration units for farms. These uses are all part of the small company’s big ambition to be part of the solution to the global problems of climate change, energy security and sustainability.

“The culture of innovation has been, and remains, the key to Sopogy’s growth,” says Kimura. “We have the intelligence here in Hawaii to make us the beacon for the rest of the world when it comes to clean and green power.