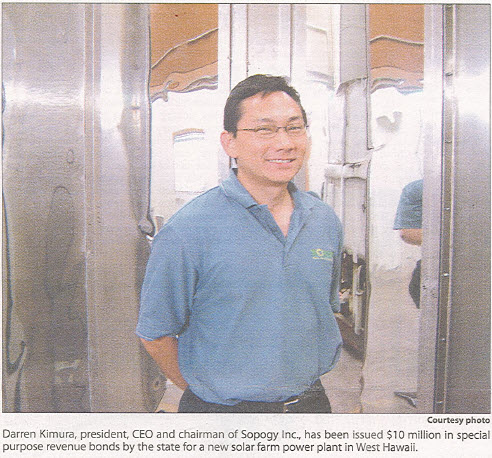 Darren Kimura learned early to use his imagination.

Growing up in Hilo, the emerging renewable energy entrepreneur didn’t have much entertainment to distract him.

“A lot of successful business people come from Hilo,” he said. “The key about Hilo is you go out and make something happen.”

Kimura, 32, is president, CEO and chairman of Sopogy Inc., which the state in June approved for $10 million in special purpose revenue bonds for a new solar farm power plant in West Hawaii.

Kimura has been passionate about renewable energy since his teen and college years. He spent that time founding two energy and communication companies and teaching computers to Waiakea Intermediate School faculty.

And Kimura intends, in a modest way, to take over the world, applying the “make it happen” philosophy to a 15-hour work day that centers entirely around renewable energy, infants and home life.

He used to surf at Honolii. Surfing was one of the first things to go. He doesn’t watch TV or go out to movies anymore.

“It comes down to priorities,” he said. “Always the most important thing to me has been my family, and business. Anything that doesn’t fit into that is no longer around.”

Kimura founded Energy Industries when he was 19. Fourteen years later, the energy solutions company is on the cutting edge of renewable energy research and engineering, with 12 offices and more than 200 employees in the U.S., Guam and Hong Kong.

Kimura founded Energy Laboratories in 2000 to expand and diversify Energy Industries. He describes the company as a place where energy innovations can incubate until they are ready for the market. The company has more than 20 such concepts in incubation and has turned nine others into multi-million dollar companies geared at solving energy problems.

The top earner garners $50 million in annual revenue. All of the companies started in Hawaii.

From there, Kimura’s resume of start-ups begins to resemble that of a tycoon. In 1996, he created Energy Conservation in Hawaii; in 1998, Pacific Energy Services; in 2000, eCONTROLS; in 2001, EnergySmart; in 2003, Lighting and Electrical Company; in 2004, Facility Solutions. In 2006, he acquired Quantum Lighting and Quantum Energy.

Kimura lives on Oahu now, but both he and his wife, Kelly, are from Hilo. Kimura attended Waiakea Intermediate School, where he was a computer geek. He remembers enjoying the contact with nature: Camping, hiking, fishing and scouting. He wasn’t an exceptional student, he says. He attributes his success to what he calls “laser beam focus.”

After all, you have to eat your Wheaties if you want to wean a state of its dependency on foreign oil. Kimura sees that as a personal quest.

“I want energy independence for Hawaii,” Kimura said. “It’s a big task, and I want to do it in my generation. We’re 89 percent dependent on foreign oil.”

Sopogy Inc. today offers new concentrated solar power collectors to generate electricity and air conditioning, industrial steam and agricultural drying, with the potential for creating drinking water from evaporated sea water along the way. Kimura is still working to shrink the technology down to where it can be used by individual households.

“The markets we can go after now are the larger businesses and utilities,” he said.

Kimura’s new 3,000-reflector solar farm, under the name Keahole Solar Power, will be built on six acres at the Natural Energy Laboratory of Hawaii Authority in Kona. Capable of producing a megawatt of electricity and powering 500 homes, the $8 million project will likely be online by July 2008, Kimura said. The farm will be able to produce electricity about 25 percent more cheaply than conventional means, he said.

Keahole Solar Power is in the design phase, about a month away from breaking ground if its permits come through.

“The good thing about solar is it’s typically a lot faster to construct; you’re dealing with traditional metal, glass and concrete, and you’re not dealing with rare or toxic materials,” Kimura said. “This is a good project and we want it to happen as soon as possible.”

In addressing climate change, energy security and sustainability, Kimura can’t say enough about solar. Its production cycle meshes perfectly with the human use cycle, he says, and on the sunny west side of the island, solar is very cost effective, even if it’s less so in the rainy and cloudy east side climate.

Kimura said the Big Island’s efforts at geothermal and wind-powered ventures are a step in the right direction. But with fossil fuels dwindling and global warming looming, renewable energy is not just an option, but a growing imperative to Kimura.

“Renewable energy is good for the environment, the pocketbook and society,” he said. “These are the kinds of things we have to do now. The incentives are there. There is no better time to go green.”

Bret Yager can be reached at byager@hawaiitribune-herald.com