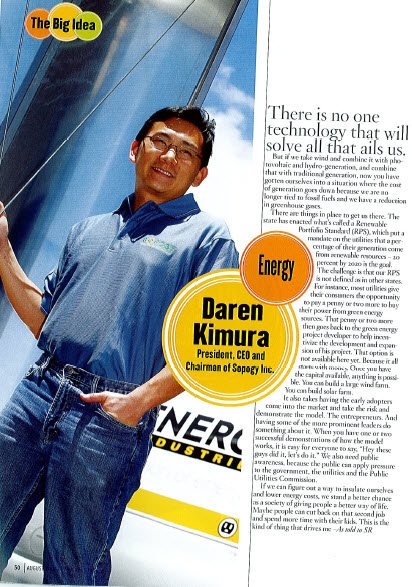 There is no one technology that will solve all that ails us.

But if we take wind and combine it with photovoltaic and hydro-generation, and combine that with traditional generation, now you have gotten ourselves into a situation where the cost of generation goes down because we are no longer tied to fossil fuels and we have a reduction in greenhouse gases.

There are things in place to get us there. The state has enacted what’s called a Renewable Portfolio Standard (RPS), which put a mandate on the utilities that a percentage of their generation come from renewable resources Ð 20 percent by 2020 is the goal. The challenge is that our RPS is not defined as in other states. For instance, most utilities give their consumers the opportunity to pay a penny or two more to buy their power from green energy sources. That penny or two more then goes back to the green energy project developer to help incentivize the development and expansion of his project. That option is not available here yet. Because it all starts with money. Once you have the capital available, anything is possible. You can build a large wind farm. You can build solar farm.

It also takes having the early adopters come into the market and take the risk and demonstrate the model. The entrepreneurs. And having some of the more prominent leaders do something about it. When you have one or two successful demonstrations of how the model works, it is easy for everyone to say, “Hey these guys did it, let’s do it.” We also need public awareness, because the public can apply pressure to the government, the utilities and the Public Utilities Commission.

If we can figure out a way to insulate ourselves and lower energy costs, we stand a better chance as a society of giving people a better way of life. Maybe people can cut back on that second job and spend more time with their kids. This is the kind of thing that drives me. ÐAs told to SR